Windows 11 is set to receive its first major update in the fall and there’s been some evidence suggesting that drag and drop functionality is in the works. In addition to drag and drop support, other major improvements are also coming, including features like a better overlay menu which has been requested by many.

Microsoft also appears to be working on a new taskbar toggle that will allow users to quickly view recently opened apps on their phones directly from Windows 11. This feature was quietly teased during Samsung’s unpacked event and we’ve uncovered additional details.

The new “recent app” feature of the Your Phone app is based on the existing “Apps” feature which allows users to open their Android apps on Windows. Thanks to the new feature and Your Phone app’s taskbar integration, you can now easily access the three most recently used apps. 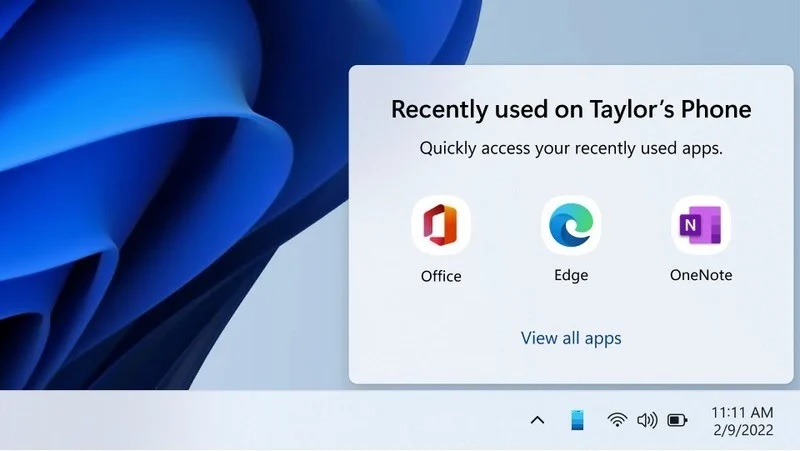 As you can see in the above screenshot, Your Phone app’s icon will appear on the right side of the taskbar, next to the options like WiFi or audio. At the moment, Your Phone’s taskbar toggle can only manage three recent apps, but Microsoft will be improving the integration in future releases.

To try Your Phone app’s new feature, simply click on ^ on the taskbar on the right bottom corner. In the flyout, you can either launch the app or access Recent Apps directly from the desktop.

You can also manage recent apps via the “Recently used” section which currently displays the three most recently used apps.

This feature will also begin rolling out to Windows 10 PCs in the coming weeks.

The recently used apps feature is currently available for select Samsung phones only. It’s also worth pointing out that Your Phone app’s integration will be enabled via Microsoft Store.